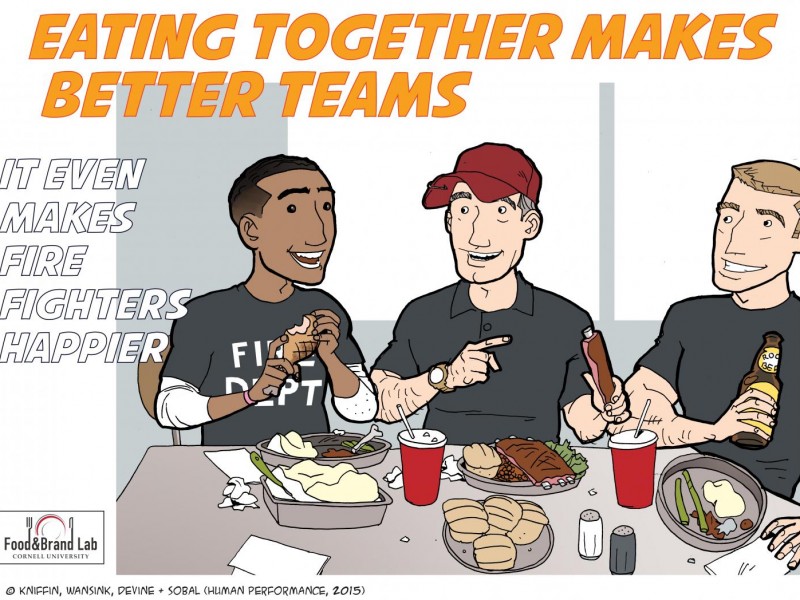 Plenty of companies invest big money to provide their employees with upscale workplace eateries or at least catered meals. But are those companies getting a good return on their investment? According to a new Cornell University study, the answer is yes.

In research that could have implications for organizations looking to enhance team performance, Cornell professors found that firefighter platoons who eat meals together have better group job performance compared with firefighter teams who dine solo.

“Eating together is a more intimate act than looking over an Excel spreadsheet together. That intimacy spills back over into work,” said the study’s author, Kevin Kniffin, visiting assistant professor in the Charles H. Dyson School of Applied Economics and Management. “From an evolutionary anthropology perspective, eating together has a long, primal tradition as a kind of social glue. That seems to continue in today’s workplaces.”

Given the findings, organizations would do better to consider their expenditures on cafeterias as investments in employee performance, Kniffin said.

“Eating Together at the Firehouse: How Workplace Commensality Relates to the Performance of Firefighters” appears in the Human Performance

Over the course of 15 months, Kniffin and his colleagues conducted interviews and surveys in a large city’s fire department, which included more than 50 firehouses. The researchers asked the department’s 395 supervisors to rate on a scale of zero to 10 the performance of their platoon compared to other fire companies in which they’ve served. The supervisors were also asked how often the platoon eats together in a typical four-day work week. The platoons who ate together most often also got higher marks for their team performance. Conversely, the platoons that did not eat together got lower performance ratings.

In interviews, firefighters said daily group meals were a central activity during their shifts. Some firefighters who worked a shift that started at 6 p.m. often ate two dinners, one at home and a second at the firehouse. One firefighter said, in the company of his co-workers, “you don’t want to dis the wife” by turning down the food she prepared – implying that it was just as important to avoid disrespecting his co-workers. “To me, that’s a good example of the importance of the group. It’s comparable to his family,” said Kniffin, whose father was a longtime big-city firefighter.

In fact, the researchers noted, firefighters expressed a certain embarrassment when asked about firehouses where they didn’t eat together. “It was basically a signal that something deeper was wrong with the way the group worked,” Kniffin said.