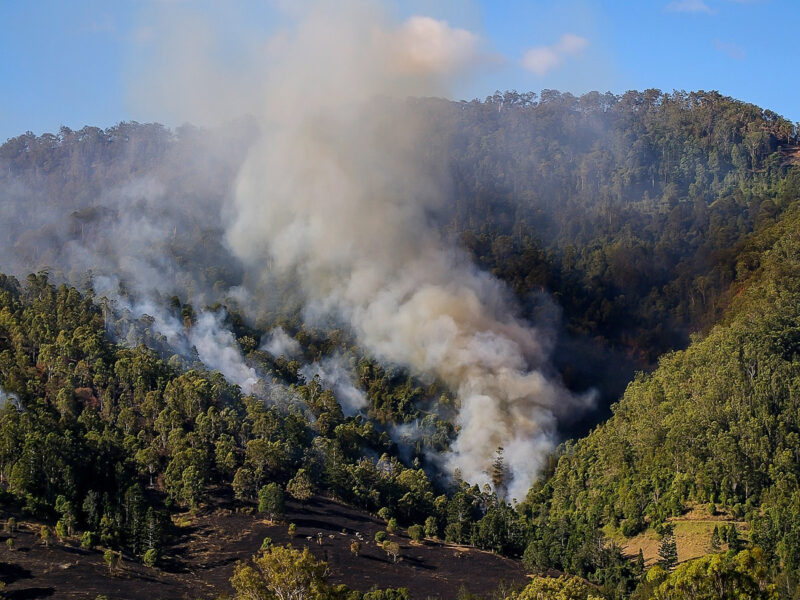 Lightning-sparked wildfires that have raged in Yosemite’s Illilouette Creek Basin over the past half century have been visible across the landscape. Although closely monitored, they are largely unchecked. The flames could explode into heat plumes that can burn entire hillsides, or they might sit in the underbrush for many months.

The result is 60 square miles forest that looks remarkably different to other parts in the Sierra Nevada. Instead of thick wall to wall tree cover, the result of over a century of wildfire suppression, the landscape is made up of patches of grassland shrubland and wet fields filled with wildflowers. These gaps are often filled with the blackened husks burned trunks, or the young green of young pines.

“It really is a glimpse into what the Sierra Nevada was like 200 years ago,” said Scott Stephens, a professor of environmental science, policy and management at the University of California, Berkeley, and co-director of Berkeley Forests.

Stephens is the senior author of a new study that gathers together decades of research documenting how the return of wildfire has shaped the ecology of Yosemite National Park’s Illilouette Creek Basin and Sequoia and Kings Canyon National Parks’ Sugarloaf Creek Basin since the parks adopted policies for the basins — at Illilouette Creek in 1972 and Sugarloaf Creek in 1968 — to allow lightning-ignited fires to burn.

Although tourists and politicians are concerned about the possibility of seeing smoke from Half Dome, Stephens and his team have shown that frequent fires can be lit in these basins. They also show ecological benefits such as increased plant and insect biodiversity, reduced wildfires, and more water during droughts. These benefits, according to research, are likely to increase forest resilience to climate change’s warmer, dryer conditions.

“In many ways, fire has successfully been restored to Illilouette, and it has made for a complex mosaic of vegetation with cascading effects on things like water,” said study co-author Brandon Collins, who holds a joint appointment as a research scientist with Berkeley Forests and with the U.S. Forest Service. “In Illilouette, you can have patches of young, regenerating trees from a fire 15 years ago, or areas where a classic understory burn has resulted in big, old, widely-spaced trees. You can even have areas where fire has missed because there’s more moisture, such as adjacent to a creek or on the edge of a meadow. All this complexity can happen in a really short amount of space.”

The findings of the study were made during a critical fire season in which drought conditions in the west have already led to numerous large wildfires across the country, including the Dixie Fire. This was the largest wildfire in California’s history. Stephens believes climate change is responsible for increasing the severity and intensity of these fires. Stephens says Illilouette Creek Basin shows how current forest conditions in Sierra, which have been shaped over decades by fire suppression, are also driving these huge blazes.

Stephens said that climate change is only 20 to 25% to blame for current fire problems in the state. “Illilouette Basin is one of the few places in the state that actually provides that information, because there is no evidence of changes in fire size or in the severity of fires that burn in the area. So, even though the ecosystem is being impacted by climate change, its feedbacks are so profound that it’s not changing the fire regime at all.”

For millennia wildfires, whether sparked or lit by Native American tribes and lightning, have shaped the landscape in the west U.S.A., causing destruction as well as triggering cycles of rebirths and regeneration. The U.S. Forest Service was established in 1905 by the U.S. Forest Service. In the meantime, European colonists arrived in the late 1800s.

Many forest managers and ecologists began to question the wisdom behind fire suppression in the 1940s/50s. This was because the practice eliminated valuable wildlife habitat, and increased the severity of fires through fuel buildup over decades. A. Starker Leopold (a renowned conservationist and professor of zoology, forestry, and UC Berkeley) were among these fire proponents. Harold Biswell was also a professor at UC Berkeley’s School of Forestry.

Collins stated, “I think it was finally recognized that fire is an integral piece of these ecosystems, and there were a few key people who were willing to take the risk of letting these fires happen.”

It’s not always neat and it’s often not nice.

Illilouette Creek Basin had 21 fires exceeding 40 hectares in the period 1973-2016, which is roughly equivalent to 75 football pitches. Sugarloaf was home to 10 fires. Although it may seem messy, Illilouette’s forest is very resilient.

Stephens explained that some people visit Illilouette and say, “Look at all those dead trees!” “I think we have this idea that forests need to be green all the time and made up with only big trees. But it turns out that no forest can do that. It has to be able to grow young trees and regenerate. Illilouette is doing that, but it isn’t always clean, and it’s not always nice.”

Wildfire created more habitats in Illilouette for animals such bees or bats, and allowed a wide variety of plant life. Foresters can also benefit from the detailed history of wildfires at Illilouette to learn how one wildfire affects landscape and vegetation, and what the future holds for them.

Collins stated, “Since fires are generally allowed to burn freely in Illilouette, we could look at what happens when two fires have burned close to each other: When does the second fire burn into the area that was burned by the first fire, and when does it stop at the previous perimeter?” Collins said. “We found that it really depended on the amount of time that had passed since the first fire. If it had been nine years or under, fires almost never burned into a previous fire perimeter.”

Collins explained that Illilouette gave forest managers an opportunity to see how wildfire behaves when it is not at its most severe.

“One of the things that’s kind of perverse about the fire suppression policy is that we actually constrain fires to only burn under the worst conditions. If the fire is mellow, that’s a good time to put it out, and, as a result, they only burn when we can’t put them out,” Collins said. “But by letting these fires burn [in Illilouette], they’re able to experience the full range of weather conditions. On bad days, some of these fires have really put up a pretty good plume. But on the flip side, they also get to burn under more moderate conditions, too, and it makes for really varied effects.”

Restoring fire to Illilouette had also the counterintuitive effect of increasing water availability in the basin. This was a key finding, especially as California experiences yet another year of severe drought.

Gabrielle Boisrame is an assistant researcher professor at the Desert Research Institute. Gabrielle Boisrame was a Ph.D student in environmental engineering at UC Berkeley when she began to study water in Illilouette. The results of her simulations and measurements suggest that the small gaps created by wildfires in the tree canopy have allowed more water from rain and snow to reach the ground. This has also helped reduce the number trees competing for water resources. The soil moisture levels in Illilouette have increased by up to 30% between 1969-2012, which may explain the low tree mortality rates during the drought years of 2014/2015.

Additionally, measurements show that streamflow out Illilouette Creek Basin is slightly higher than it was before the managed wildfire program. However, streamflow out from similar watersheds within the Sierras has all declined. Increasing the water flow downstream will be beneficial for both the people and the aquatic ecosystems dependent on this resource.

Boisrame said that although there’s increasing research on fire and hydrology, the majority of other research is focused on catastrophic fires that destroyed entire forests. “As far as we know, we’re the only ones in the western U.S. studying a restored fire regime, where we’re not just looking at one individual fire, but a number of fires of mixed severity that have occurred over natural intervals of time. There just aren’t that many places to study the long-term effects of these repeated wildfires because Sugarloaf and Illilouette were the first areas in California — really the first western mountain watersheds — where they started allowing fires to burn most of the time.”

Fighting for the flames

The vast majority of U.S. parks now allow fire use. These federal fire use guidelines have struggled to gain traction due to the inherent dangers involved in managing wildfire.

According to the study, even in Sugarloaf Creek Basin where there have been many fires, there has been significantly more fire suppression than in Illilouette. Sugarloaf’s ecological benefits aren’t as significant as Illilouette.

“I think one of the key things to recognize is that the landscape in Illilouette was already somewhat unique, partly because it is at slightly higher elevation than a lot of the forests we manage,” Collins said. “As a result, it already had a mix of vegetation with patches of meadows and rock, and I think maybe that gave managers a little more ease in letting fire happen there. It doesn’t have the potential to really push off a giant megafire because it lacks the continuity that some of these other areas have.”

While both naturally-sparked fires and prescribed burns could help large swathes of the Sierra forest become more resilient to both drought and high severity fire, opposition to national “let it burn” policies in California remains strong, with state and local fire agencies often favoring the safety of fire suppression.

Stephens and Collins both agree that managing wildfire is now more risky than when Yosemite’s forest managers permitted them to burn in 1972. But they claim that fire suppression will not work long-term, as the longer forest fuels are left to accumulate, the more likely wildfires will start.

“In order to actually allow this to happen, political and public institutions need to be willing to accommodate risk, because there will be some unpredictability. There are going to be fires that get larger, and more severe burning in places that have had very little fire for a century or more,” Stephens said. “We can’t guarantee that Illilouette is going to be the new outcome, because it started when climate change was not nearly as severe. So, political institutions will have to accommodate that, or the first fire that doesn’t do exactly what we hope will shut down the whole program.”

Stephens and Collins advocate for more aggressive prescribed fires and restoration thinning in the Sierra to get the forests to a point where lightning-sparked fires are allowed to burn more safely.

Stephens credits strong, early leadership at Yosemite — including that of study co-author Jan W. van Wagtendok, who received a Ph.D. from UC Berkeley in 1972 and went on to serve as a research scientist at Yosemite for most of his career — for taking the huge risk of launching the program and allowing early fires to burn in the park.

Stephens stated, “It’s been 50 years now, but I think what we’ve learned helps us understand what is possible, We have 10 to 20 years to actually change the trajectory of the forest ecosystems in our state, and if we don’t change them in 10 or 20 years, the forest ecosystems are going to change right in front of our eyes, and we’re just going to be passengers. That’s why it’s so important to continue this work.”