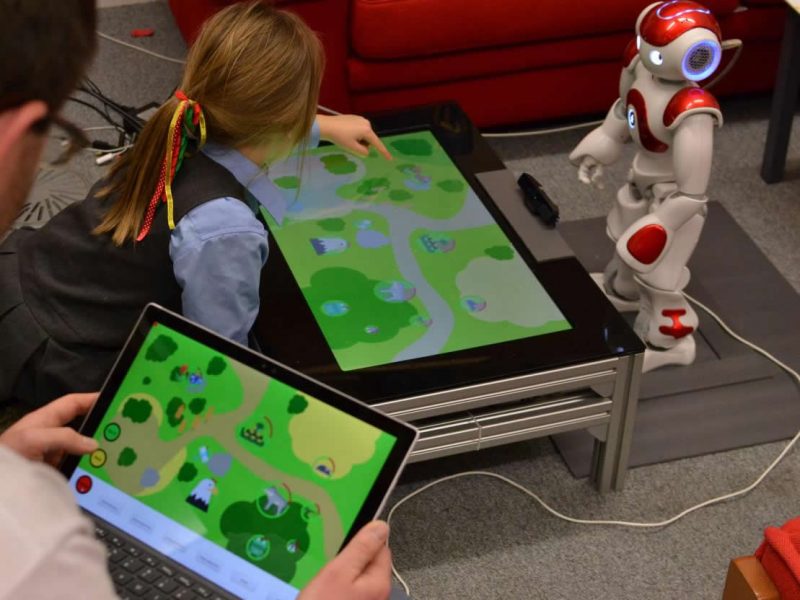 Robots can take just three hours to successfully learn techniques which can be used to support teachers in a classroom environment, according to new research.

The study, published in Science Robotics, saw a robot being programmed to progressively learn autonomous behaviour from human demonstrations and guidance.

A human teacher controlled the robot, teaching it how to help young pupils in an educational activity, and it was then able to support the children in the same activity autonomously. The advice it subsequently provided was shown to be consistent with that offered by the teacher.

Researchers say the technique could have a number of benefits to teachers, as they face increasing demands on their time, and could be positive for pupils, with research previously showing that using robots alongside teachers in the classroom can have benefits for their education.

They also believe it holds considerable potential for a number of other sensitive applications of social robots, such as in eHealth and assistive robotics.

Through a series of assessments, they analysed a system called SPARC (Supervised Progressively Autonomous Robot Competencies) and demonstrated that in a little over three hours, the robot could be successfully taught by the teacher to support an educational activity.

Although the autonomous robot used actions with a different frequency than the teacher, it only used actions already demonstrated, learned the unique dynamics associated to each type of action, and its behaviour had a positive impact on the children. Indeed, the robot was also able to successfully learn how to support the children with social actions, like praise and encouragements.

The researchers say this could prove especially useful in future human-robot interactions because it would enable scientists to bypass the standard approach to designing robotic controllers, whereby domain experts describe a behaviour to be implemented by engineers. Instead this approach empowers end-users to directly teach a robot.

Dr Emmanuel Senft, who led the study as part of his PhD research, said: “Creating autonomous social robot behaviours is a core challenge in social robotics, in both technical and ethical terms. My dream is that everyone should be able to profit from robots, not only engineers, and I think allowing people to teach robots to interact is the way to go. I hope the method we have proposed here could work in that regard and be applied to a large range of situations, for social and non-social robots.”

Professor Tony Belpaeme, from the University of Plymouth and Ghent University, has worked in the field of social robotics for around two decades and was also involved in the study. He added: “The positives of using robots to help in a classroom setting are there for everyone to see. But how to set them to work so they provide consistent support to pupils, in a way that teachers can trust, is a real challenge. This study is certainly a positive step towards that. However, one unexpected thing it did show is we perhaps need to build greater acceptance and trust among teachers themselves as they said it did not result in a reduction to their workloads.”