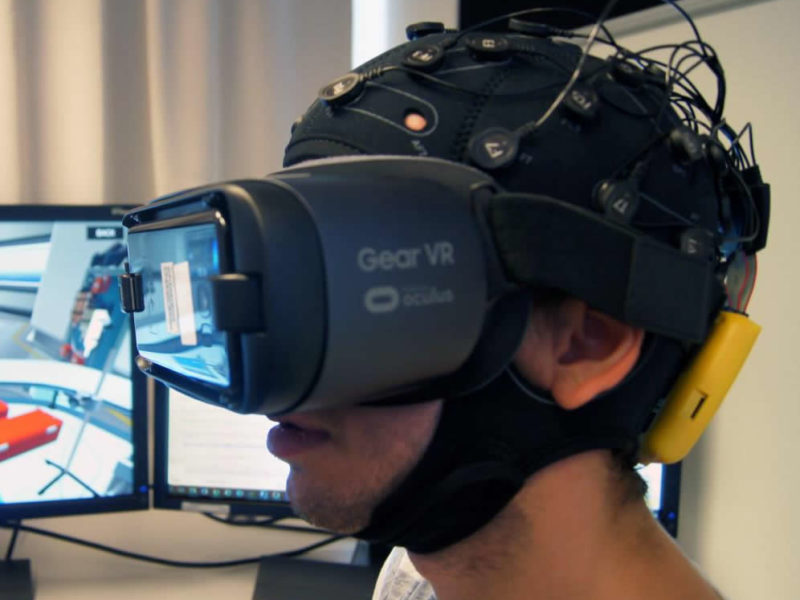 Teachers make all the difference — also in virtual reality teaching

Few years from now, students in schools all over the world will receive part of their education in virtual learning environments. Wearing VR-goggles the students will be able to enter 3-dimentional, simulated places and situations that they would normally not have access to because it would be too expensive, too dangerous or physically impossible. Teaching via VR-technology is spreading widely these years and international studies predict that this will revolutionize the way we learn.

Using VR, students can learn about the cells in the human body while “travelling” into the bloodstream, or “explore” the degree of plastic pollution in the oceans. They can also conduct complicated experiments using expensive lab-equipment and dangerous chemicals, just by putting on a pair of VR-goggles that immediately offers very realistic and lively experiences.

According to several of these reports, the cost of VR-technology will be reduced so much over the next 2-3 years that it will be included in everyday classroom teaching for around 15 million students across nations before 2025. This prognosis is backed by large investments in developing VR for teaching by tech-giants such as Apple, Google and Samsung.

But the rapid growth of VR-technology in teaching is a new and relatively un-tested field, and at the University of Copenhagen Associate Professor in Psychology Guido Makransky investigates how, why, and in what settings VR-learning provides an advantage over traditional methods and media, so society´s investments in VR-technology can be used in the most beneficial way.

-Our studies show that VR-learning where students train certain skills via simulations can be more effective than regular classroom teaching or learning via computers, and that it motivates and engages students more and heighten their self-efficacy. However, we need more information on when and how teaching via VR-simulations is an advantage, so we can steer clear of thoughtless investments in technology just for the sake of investing in technology without any real benefits in terms of better learning, he says.

Guido Makransky is especially interested in the pedagogical factors of VR-learning. In previous studies he has tested hundreds of high school and university student’s cognitive and emotional learning processes using electroencephalography (EEG) and by registering their sweat-responses (GSR), eye-tracking and facial expressions.

Since 2014 Makransky has documented in various studies that VR-learning in certain situations is more engaging and can lead to better learning outcomes compared to traditional methods. Furthermore, his latest research shows that girls and boys learning differs greatly depending on the form and appearance of the virtual teacher, the so called pedagogical agent.

In a study with 66 7th and 8th -grade students (half boys, half girls) at a Danish science talent school, Makransky and colleagues found that the girls learned most in the VR-simulations, when the VR-teacher there was a young, female researcher named Marie, whereas the boys learned more, while being instructed by a flying robot in the form of a drone.

-We can see that students´ ability to identify with the pedagogical agent improves their level of learning. This gives us an exciting possibility to actually make education more appealing to the students. This is important as children’s’ interest in school decreases in middle school, and there is specifically a desire to increase female students’ interest, in science, technology, engineering and maths (STEM) subjects. Therefore, the possibility to engage girls is very appealing. In our opinion VR-program designers should use this knowledge to incorporate different types of pedagogical agents in VR for different types of students, says Guido Markansky.

The boys in the study on the other hand learned best, when the pedagogical agent instructing them was a flying robot in the form of a drone.

-Our results show, that the boys´ concentration and focus on the task rises when their virtual teacher is a non-traditional teaching figure like a robot or a drone. We also see these types of pedagogical agents are more effective in terms of the boys´ learning outcomes, possibly because they portray some of the superhero-qualities, that appeal widely to boys, and because they resemble the agents, boys are used to interact with in computer games, says Guido Makransky

Other aspects of VR-teaching examined

The younger the students the more important it appears to be that they can relate to their VR-teacher. University students for instance have not been found to learn better when instructed by a figure that resembles themselves, whereas the ability to mirror oneself in the teaching figure has been identified as being very important for students in middle school classes.

But there are still many unanswered questions regarding VR-learning, adds Guido Makransky, who is currently heading a project funded by the Danish Innovation Fund where he and his fellow researchers at the University of Copenhagen Virtual Learning Lab examine a number of other aspects of when it is most beneficial for schools to implement VR-for teaching and how you design VR-learning experiences, that really add value to education and function well in a classroom setting.