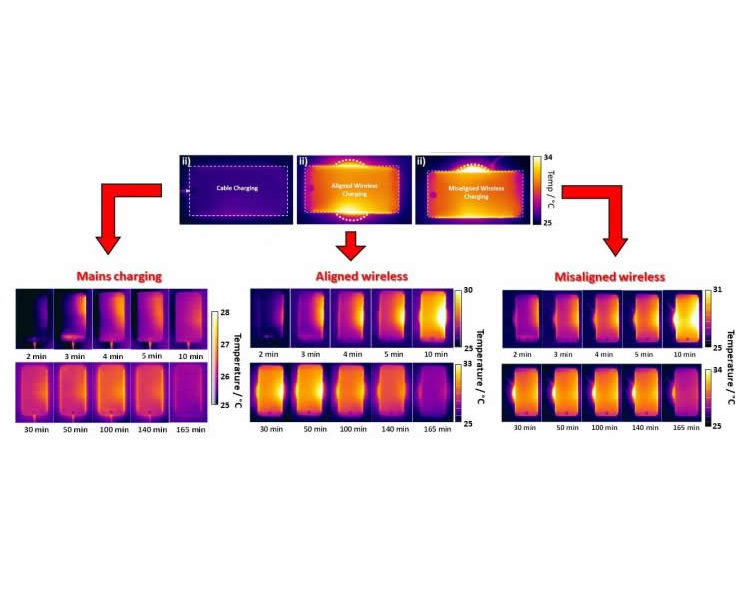 Researchers at WMG at the University of Warwick have found that use of inductive charging, whilst highly convenient, risks depleting the life of mobile phones using typical LIBs (Lithium-ion batteries)

Consumers and manufacturers have ramped up their interest in this convenient charging technology, abandoning fiddling with plugs and cables in a favour of just setting the phone directly on a charging base.

Standardisation of charging stations, and inclusion of inductive charging coils in many new smartphones has led to rapidly increasing adoption of the technology. In 2017, 15 automobile models announced the inclusion of consoles within vehicles for inductively charging consumer electronic devices, such as smartphones – and at a much larger scale, many are considering it for charging electric vehicle batteries.

Inductive charging enables a power source to transmit energy across an air gap, without the use of connecting wire but one of the main issues with this mode of charging is the amount of unwanted and potentially damaging heat that can be generated. There are several sources of heat generation associated with any inductive charging system – in both the charger and the device being charged. This additional heating is made worse by the fact that the device and the charging base are in close physical contact, any heat generated in one device may be transferred to the other by simple thermal conduction and convection.

In a smartphone, the power receiving coil is close to the back cover of the phone (which is usually electrically nonconductive) and packaging constraints necessitate placement of the phone’s battery and power electronics in close proximity, with limited opportunities to dissipate heat generated in the phone, or shield the phone from heat generated by the charger. It has been well-documented that batteries age more quickly when stored at elevated temperatures and that exposure to higher temperatures can thus significantly influence the state-of-health (SoH) of batteries over their useful lifetime.

The rule of thumb (or more technically the Arrhenuis equation) is that for most chemical reactions, the reaction rate doubles with each 10 °C rise in temperature. In a battery, the reactions which can occur include the accelerated growth rate of passivating films (a thin inert coating making the surface underneath unreactive) on the cell’s electrodes. This occurs by way of cell redox reactions, which irreversibly increase the internal resistance of the cell, ultimately resulting in performance degradation and failure. A lithium ion battery dwelling above 30 °C is typically considered to be at elevated temperature exposing the battery to risk of a shortened useful life.

Guidelines issued by battery manufacturers also specify that the upper operational temperature range of their products should not surpass the 50?60 °C range to avoid gas generation and catastrophic failure.

These facts led WMG researchers to carry out experiments comparing the temperature rises in normal battery charging by wire with inductive charging. However the WMG were even more interested in inductive charging when the consumer misaligns the phone on the charging base. To compensate for poor alignment of the phone and the charger, inductive charging systems typically increase the transmitter power and/or adjust their operating frequency, which incurs further efficiency losses and increases heat generation.

This misalignment can be a very common occurrence as the actual position of the receiving antenna in the phone is not always intuitive or obvious to the consumer using the phone. The WMG research team therefore also tested phone charging with deliberate misalignment of transmitter and receiver coils.

All three charging methods (wire, aligned inductive and misaligned inductive) were tested with simultaneous charging and thermal imaging over time to generate temperature maps to help quantify the heating effects. The results of those experiments have been published in the journal ACS Energy Letters in an article entitled “Temperature Considerations for Charging Li-Ion Batteries: Inductive versus Mains Charging Modes for Portable Electronic Devices.”

Also noteworthy was the fact that the maximum input power to the charging base was greater in the test where the phone was misaligned (11W) than the well-aligned phone (9.5 W). This is due to the charging system increasing the transmitter power under misalignment in order to maintain target input power to the device. The maximum average temperature of the charging base while charging under misalignment reached 35.3 °C, two degrees higher than the temperature detected when the phone was aligned, which achieved 33 °C. This is symptomatic of deterioration in system efficiency, with additional heat generation attributable to power electronics losses and eddy currents.

The researchers do note that future approaches to inductive charging design can diminish these transfer losses, and thus reduce heating, by using ultrathin coils, higher frequencies, and optimized drive electronics to provide chargers and receivers that are compact and more efficient and can be integrated into mobile devices or batteries with minimal change.

In conclusion, the research team found that inductive charging, whilst convenient, will likely lead to a reduction in the life of the mobile phone battery. For many users, this degradation may be an acceptable price for the convenience of charging, but for those wishing to eke out the longest life from their phone, cable charging is still recommended.