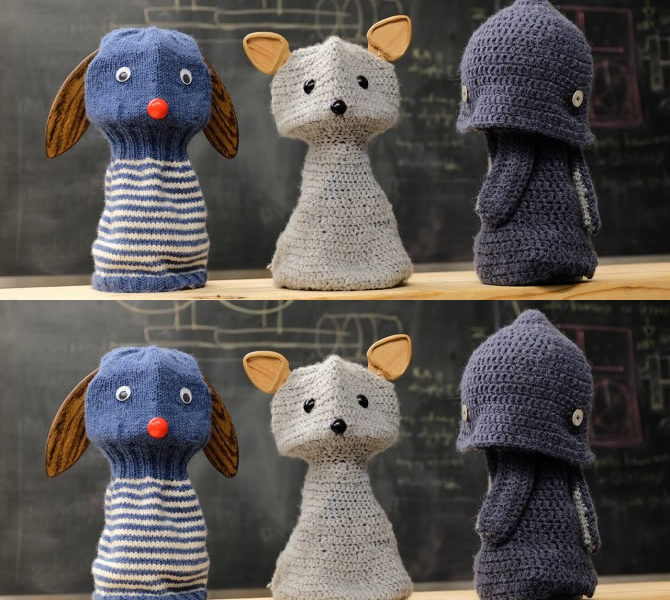 A new social robot that can be customized with handcrafted material, such as wood and wool, brings simplicity and fun to home robotics — and will soon be used to help teach math to fourth graders.

Guy Hoffman, assistant professor in the Sibley School of Mechanical and Aerospace Engineering at Cornell University, envisioned robots built from warmer, homier materials that could be customized by their owners, so each would be unique. These ideas led Hoffman to create Blossom – a simple, expressive, inexpensive robot platform that could be made from a kit and creatively outfitted with handcrafted materials.

“We wanted to empower people to build their own robot, but without sacrificing how expressive it is,” said Hoffman, senior author of “Blossom: A Handcrafted Open-Source Robot,” published in the Association for Computing Machinery Transactions on Human-Robot Interaction. “Also, it’s nice to have every robot be a little bit different. If you knit your robot, every family would have their own robot that would be unique to them.”

Blossom’s mechanical design – developed with Michael Suguitan, a doctoral student in Hoffman’s lab and first author of the paper – is centered on a floating “head” platform using strings and cables for movement, making its gestures more flexible and organic than those of a robot composed of rigid parts.

Partly because of its simplicity, Blossom has a variety of potential uses, Hoffman said. Human-robot interaction researchers who aren’t engineers could build their own from a kit to use in studies. Because of the ease of interacting with the robot and the hands-on experience of helping to build it, it could help teach children about robotics.

In a case study, children ages 4-8 had a chance to control and make accessories for Blossom at a science fair. Some children created accessories, such as appendages or jewelry, while others controlled the robot so the new items could be attached, illustrating how Blossom could inspire collaboration.

In the coming months, Blossom will be used by the Upper Grand school district in Ontario, Canada, to help teach math to fourth-graders, Hoffman said.

He said his team also has been working on an algorithm to make Blossom react to YouTube videos – performing a certain dance in response to a certain song, for instance, building on previous research showing that a robot’s response to listening to songs can influence a human’s reaction. This might be particularly useful in modeling behavior for children with autism, Hoffman said.

“It’s meant to be a flexible kit that is also very low cost. Especially if we can make it out of cardboard, you could make it very inexpensively,” he said. “Because of computation becoming so powerful, it could be a really open-ended way for people to do whatever they want with robotics.”