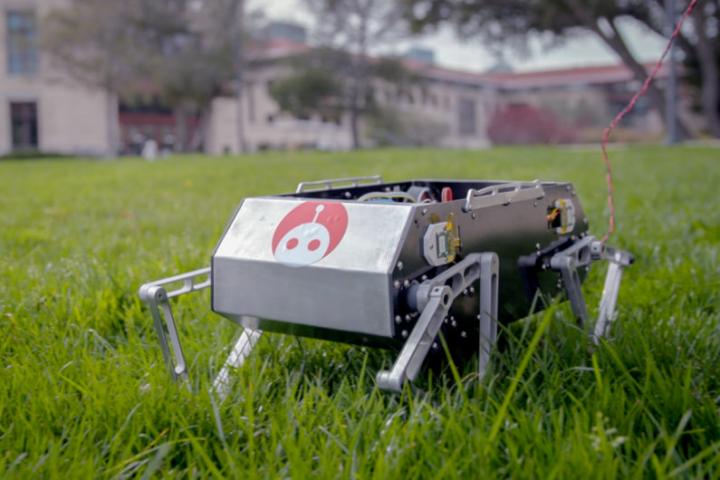 Putting their own twist on robots that amble through complicated landscapes, the Stanford Student Robotics club’s Extreme Mobility team at Stanford University has developed a four-legged robot that is not only capable of performing acrobatic tricks and traversing challenging terrain but is also designed with reproducibility in mind. Anyone who wants their own version of the robot, dubbed Stanford Doggo, can consult comprehensive plans, code and a supply list that the students have made freely available online.

“We had seen these other quadruped robots used in research, but they weren’t something that you could bring into your own lab and use for your own projects,” said Nathan Kau, ’20, a mechanical engineering major and lead for Extreme Mobility. “We wanted Stanford Doggo to be this open source robot that you could build yourself on a relatively small budget.”

Whereas other similar robots can cost tens or hundreds of thousands of dollars and require customized parts, the Extreme Mobility students estimate the cost of Stanford Doggo at less than $3,000 – including manufacturing and shipping costs – and nearly all the components can be bought as-is online. They hope the accessibility of these resources inspires a community of Stanford Doggo makers and researchers who develop innovative and meaningful spinoffs from their work.

Already Stanford Doggo can walk, trot, dance, hop, jump and perform the occasional backflip. The students are working on a larger version of their creation – which is currently about the size of a beagle – but will take a short break to present Stanford Doggo at the International Conference on Robotics and Automation in Montreal, Canada.

A hop, a jump and a backflip

In order to make Stanford Doggo replicable, the students built it from scratch. This meant spending a lot of time researching easily attainable supplies and testing each part as they made it, without relying on simulations.

“It’s been about two years since we first had the idea to make a quadruped. We’ve definitely made several prototypes before we actually started working on this iteration of the dog,” said Natalie Ferrante, ’19, a mechanical engineering coterminal student and Extreme Mobility Team member. “It was very exciting the first time we got him to walk.”

Stanford Doggo’s first steps were admittedly toddling, but now the robot can maintain a consistent gait and desired trajectory, even as it encounters different terrains. It does this with the help of motors that sense external forces on the robot and determine how much force and torque each leg should apply in response. These motors recompute at 8,000 times a second and are essential to the robot’s signature dance: a bouncy boogie that hides the fact that it has no springs. Instead, the motors act like a system of virtual springs, smoothly but perkily rebounding the robot into proper form whenever they sense it’s out of position.

Among the skills and tricks the team added to the robot’s repertoire, the students were exceptionally surprised at its jumping prowess. Running Stanford Doggo through its paces one (very) early morning in the lab, the team realized it was effortlessly popping up 2 feet in the air. By pushing the limits of the robot’s software, Stanford Doggo was able to jump 3, then 3½ feet off the ground.

“This was when we realized that the robot was, in some respects, higher performing than other quadruped robots used in research, even though it was really low cost,” recalled Kau.

Since then, the students have taught Stanford Doggo to do a backflip – but always on padding to allow for rapid trial and error experimentation.

What will Stanford Doggo do next?

If these students have it their way, the future of Stanford Doggo in the hands of the masses.

“We’re hoping to provide a baseline system that anyone could build,” said Patrick Slade, graduate student in aeronautics and astronautics and mentor for Extreme Mobility. “Say, for example, you wanted to work on search and rescue; you could outfit it with sensors and write code on top of ours that would let it climb rock piles or excavate through caves. Or maybe it’s picking up stuff with an arm or carrying a package.”

That’s not to say they aren’t continuing their own work. Extreme Mobility is collaborating with the Robotic Exploration Lab of Zachary Manchester, assistant professor of aeronautics and astronautics at Stanford, to test new control systems on a second Stanford Doggo. The team has also finished constructing a robot twice the size of Stanford Doggo that can carry about 6 kilograms of equipment. Its name is Stanford Woofer.