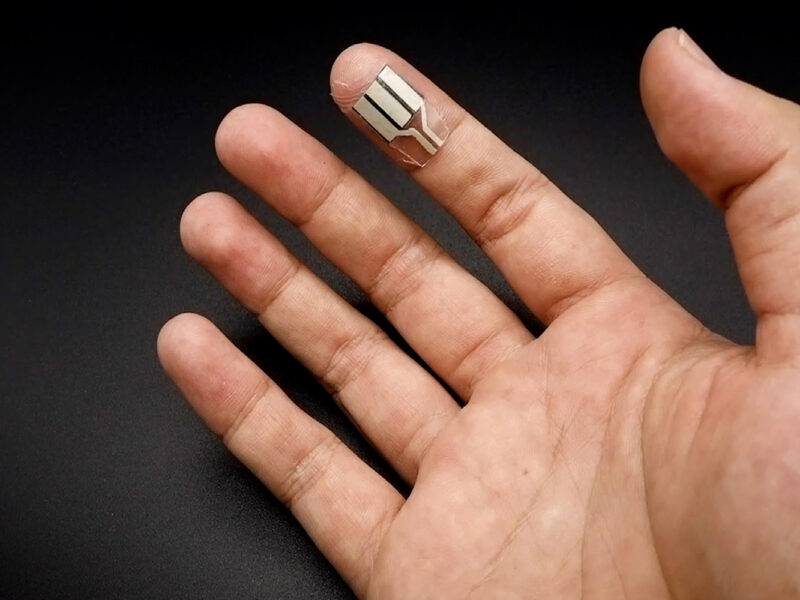 The sweat of your finger can be used to generate power for small electronics or sensors with a new wearable device. The University of California San Diego engineers created a flexible, thin strip that can be worn on the fingertip. It generates small amounts of electricity when the finger sweats or presses against it.

This device generates power even when the wearer is asleep, or sitting still. This could be a major breakthrough in the field of wearables, as researchers now know how to harness the energy from sweat.

The first of this type of device has been created, according to Lu Yin (a student in nanoengineering at the UC San Diego Jacobs School of Engineering). This device is unlike other sweat-powered wearables. It does not require any physical input or exercise. This is a major step towards making wearables more practical, accessible, and convenient for everyday people.

Light finger pressures can also be used to generate extra power, so activities like typing, texting and playing the piano can all be a source of energy.

Joseph Wang, a senior author of the study and professor of nanoengineering in the UC San Diego Jacobs School of Engineering, stated that the device could be used in all daily activities that involve touch. The goal is for this wearable to work naturally for you, so you don’t even need to think about it.

The majority of the power of the device comes from the sweat produced by your fingertips, which are 24 hour factories of sweat. The fingertips are the most sweaty area on the body. Each one contains over 1000 sweat glands, and can produce as much as 100 to 1000 times the amount of sweat.

Yin stated that sweaty areas are more noticeable on the other side of the body because they don’t have enough ventilation. The sweat that comes out of the fingertips is evaporated as soon as it reaches the air. Instead of letting it evaporate, we collect it with our device, which can produce significant amounts of energy.

However, not all sweat-fueled devices can be used on the fingertip. Yin explained that it took some advanced materials engineering to collect sweat from such a small area, and make it useful. Researchers had to design different parts of their device to absorb sweat and convert it into electrical energy.

Yin collaborated with UC San Diego’s nanoengineering Ph.D. student Jong-Min Moon, and Juliane Sepionatto on this project as part of a team that included Wang, who is also director of the Center for Wearable Sensors. Eight years ago, Wang and his team were the first to develop sweat-powered wearables. They have continued to improve on this technology ever since, creating new and better ways for wearables to be powered by sustainable sources such as their wearers and the environment.

The latest energy harvesting technology is unique in that it can be used anywhere, anytime. It is not limited by solar cells or thermoelectric generators which work only when there’s a significant temperature difference between the surrounding and the device.