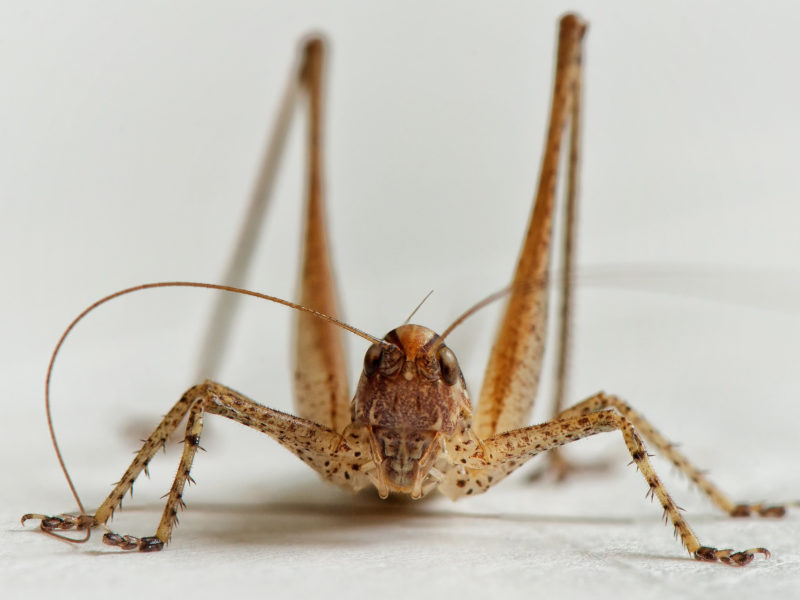 Valerie Stull was 12 when she ate her first insect.

“I was on a trip with my parents in Central America and we were served fried ants,” she says. “I remember being so grossed out initially, but when I put the ant in my mouth, I was really surprised because it tasted like food — and it was good!”

Today, Stull, a recent doctoral graduate of the University of Wisconsin-Madison Nelson Institute for Environmental Studies, is the lead author of a new pilot clinical trial published in the journal Scientific Reports that looks at what eating crickets does to the human microbiome.

It shows that consuming crickets can help support the growth of beneficial gut bacteria and that eating crickets is not only safe at high doses but may also reduce inflammation in the body.

“There is a lot of interest right now in edible insects,” Stull says. “It’s gaining traction in Europe and in the U.S. as a sustainable, environmentally friendly protein source compared to traditional livestock.”

More than 2 billion people around the world regularly consume insects, which are also a good source of protein, vitamins, minerals and healthy fats. The research team was interested in documenting for the first time via clinical trial the health effects of eating them.

“This study is important because insects represent a novel component in Western diets and their health effects in human populations haven’t really been studied,” says co-corresponding author Tiffany Weir, a professor of food science and human nutrition at Colorado State University. “With what we now know about the gut microbiota and its relationship to human health, it’s important to establish how a novel food might affect gut microbial populations. We found that cricket consumption may actually offer benefits beyond nutrition.”

Raising insects for protein not only helps protect the environment, but also offers a more healthful option than meat in many wealthy countries with high-meat diets, says co-author Jonathan Patz, director of the UW-Madison Global Health Institute, where Stull will begin a postdoctoral research position in the fall.

Crickets, like other insects, contain fibers, such as chitin, that are different from the dietary fiber found in foods like fruits and vegetables. Fiber serves as a microbial food source and some fiber types promote the growth of beneficial bacteria, also known as probiotics. The small trial probed whether insect fibers might influence the bacteria found in the gastrointestinal tract.

For two weeks, 20 healthy men and women between the ages of 18 and 48 ate either a control breakfast or a breakfast containing 25 grams of powdered cricket meal made into muffins and shakes. Each participant then ate a normal diet for a two-week “washout period.” For the following two weeks, those who started on the cricket diet consumed a control breakfast and those who started on the control diet consumed a cricket breakfast.

Every participant served as their own control for the study and the researchers were blinded with respect to which diet each participant was on at any given time.

Participants reported no significant gastrointestinal changes or side effects and the researchers found no evidence of changes to overall microbial composition or changes to gut inflammation. They did see an increase in a metabolic enzyme associated with gut health, and a decrease in an inflammatory protein in the blood called TNF-alpha, which has been linked to other measures of well-being, like depression and cancer.

Additionally, the team saw an increase in the abundance of beneficial gut bacteria like Bifidobacterium animalis, a strain that has been linked to improved gastrointestinal function and other measures of health in studies of a commercially available strain called BB-12.

But, the researchers say, more and larger studies are needed to replicate these findings and determine what components of crickets may contribute to improved gut health. “This very small study shows that this is something worth looking at in the future when promoting insects as a sustainable food source,” says Stull.

Stull is co-founder of an award-winning startup and research collaboration called MIGHTi, the Mission to Improve Global Health Through Insects. In the future, MIGHTi hopes to provide home-use insect-farming kits to communities that already consume insects, including many in southern Africa. Insects require far less water to farm than traditional livestock and can help improve food security in impoverished communities while providing economic opportunities to women.

“Most of the insects consumed around the world are wild-harvested where they are and when they are available,” says Stull, who has eaten insects — including caterpillars, cicadas, grasshoppers and beetle larvae — all over the world. “People love flying termites in Zambia, which come out only once or twice a year and are really good; they taste like popcorn and are a crunchy, oily snack.”

She hopes to promote insects as a more mainstream food in the United States, and though the industry is currently small, the rise of edible insect producers and companies using insects in their food products may make this possible.

“Food is very tied to culture, and 20 or 30 years ago, no one in the U.S. was eating sushi because we thought it was disgusting, but now you can get it at a gas station in Nebraska,” she says.