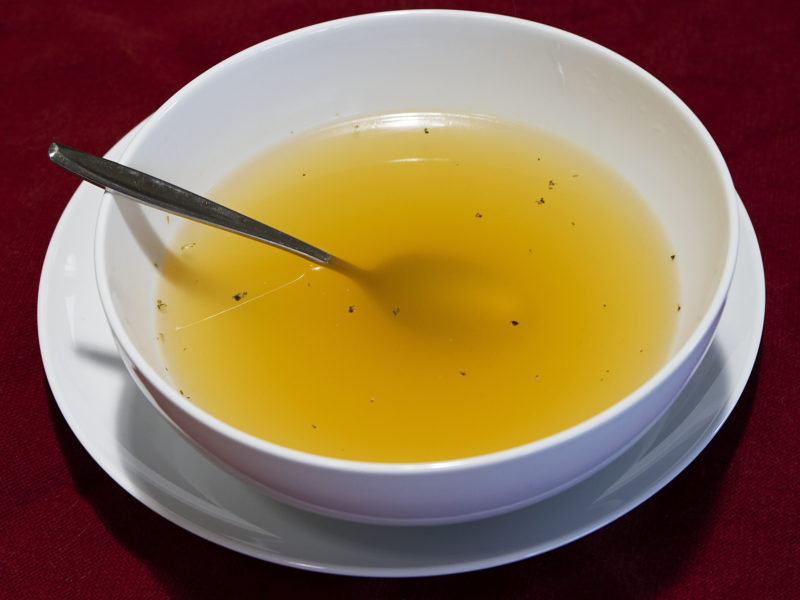 Researchers have found that consuming a broth rich in umami–or savory taste–can cause subtle changes in the brain that promote healthy eating behaviors and food choices, especially in women at risk of obesity.

Umami is a Japanese word to express a delicious, savory meal, and it represents one of the five basic tastes, together with sweet, salty, bitter, and sour. A key component of umami taste is glutamate, a naturally occurring non-essential amino acid that can be found in nearly all foods, and especially in foods high in protein such as dairy products, fish, and meat.

Previous experimental studies have shown that intake of a broth or soup supplemented with monosodium glutamate (MSG), a sodium salt of glutamate, prior to a meal can decrease appetite and food intake, especially in women with a propensity to overeat and gain weight. In a study published in Neuropsychopharmacology, researchers evaluated changes in the brains of healthy young women after they consumed chicken broth with or without MSG added.

The investigators used three laboratory tools to detect changes: a computer test that measured inhibitory control (a key mental process that is necessary for self-regulation of eating), a buffet meal during which participants ate freely while wearing special glasses that tracked eye movements, and a functional brain scan that measured brain activity while participants made food choices.

Following intake of the umami rich broth, participants performed the inhibitory control test better, had more focused gazes during the meal, and had more engagement of a brain area that is linked to successful self-regulation during food choice. Also, after consuming the umami-rich broth, those at higher risk of obesity consumed less saturated fat during the meal.

“Previous research in humans studied the effects of umami broths on appetite, which is typically assessed with subjective measures. Here, we extended these findings replicating the beneficial effects of umami on healthy eating in women at higher risk of obesity, and we used new laboratory measures that are sensitive and objective,” said senior author Miguel Alonso-Alonso, MD, PhD, an Assistant Professor at the Center for the Study of Nutrition Medicine in BIDMC’s Department of Surgery, BIDMC. He also noted that much research has examined the effects of sugar and sweetness on the brain, but the study of savory taste has been limited.

The results may open new ways to facilitate healthy eating and reduce food intake in the general population. “Many cultures around the world advocate drinking a broth before a meal. Our study suggests the possibility that people at high risk of obesity could benefit from an umami-rich broth before a meal to facilitate healthy eating and healthy food choice,” said Alonso-Alonso. “However, here we only evaluated immediate effects and in a laboratory context. Future research should address whether these observed changes can accumulate and affect food intake over time and/or whether they can be leveraged to help people lose weight more successfully.”