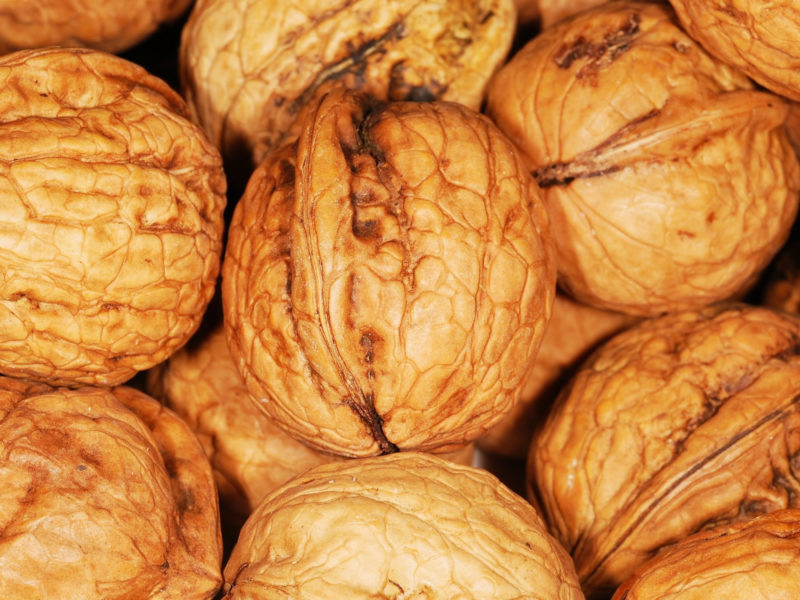 A new epidemiological study representing more than 34,000 American adults suggests that those who consume walnuts may have about half the risk of developing type 2 diabetes compared to adults who do not eat nuts. According to the study from the University of California, Los Angeles (UCLA), the average intake among walnut consumers was approximately 1.5 tablespoons per day. Doubling walnut consumption (eating 3 tablespoons) was associated with a 47% lower prevalence of type 2 diabetes. This amount of walnut intake is close to the recommended serving size of walnuts, which is one ounce or four tablespoons. The researchers did not look at the impact of increasing walnut consumption beyond doubled intake.

“These findings provide more evidence for food-based guidance to help reduce the risk for diabetes,” says Dr. Lenore Arab of the David Geffen School of Medicine at The University of California, Los Angeles. “The strong connection we see in this study between walnut consumers and lower prevalence of type 2 diabetes is additional justification for including walnuts in the diet. Other research has shown that walnuts may also be beneficial for cognitive function and heart health.”

Researchers looked at data from the National Health and Nutrition Examination Survey (NHANES), which draws from a large sampling of the U.S. population. In this study, 34,121 adults ages 18-85 years old were asked about their dietary intake, as well as if they had been diagnosed with diabetes or if they were taking medications for diabetes. Individuals were also assessed for diabetes using common laboratory measurements including fasting plasma glucose and hemoglobin A1c. Those who reported consuming walnuts showed a lower risk for type 2 diabetes compared to those who did not consume any nuts regardless of age, gender, race, education, BMI, and amount of physical activity.Individuals with diabetes often have elevated blood pressure, cholesterol, or triglycerides, which can increase the risk for heart disease and stroke. Previous studies have examined the association between walnut consumption and cardiovascular health as well as diabetes. Findings from this study provide additional support for the role of walnuts as part of a healthy diet that may help reduce the risk for diabetes.

Among the numerous properties in walnuts that may be providing health benefits, walnuts are a rich source of recommended polyunsaturated fat (13 grams per ounce), which includes the plant-based omega-3 fatty acid alpha-linolenic acid (2.5 grams per ounce).

As with any scientific research, some study limitations should be considered. Participants were asked about their dietary choices over the course of one to two days, which may not be representative of usual consumption patterns. In addition, because of the cross-sectional nature of the study, the findings cannot prove causality.

Funding for this research was provided by the California Walnut Commission (CWC). The CWC has supported health-related research on walnuts for more than 25 years. While the CWC does provide funds and/or walnuts for various projects, the actual studies are conducted independently by researchers who design the experiments, interpret the results and write the manuscripts.