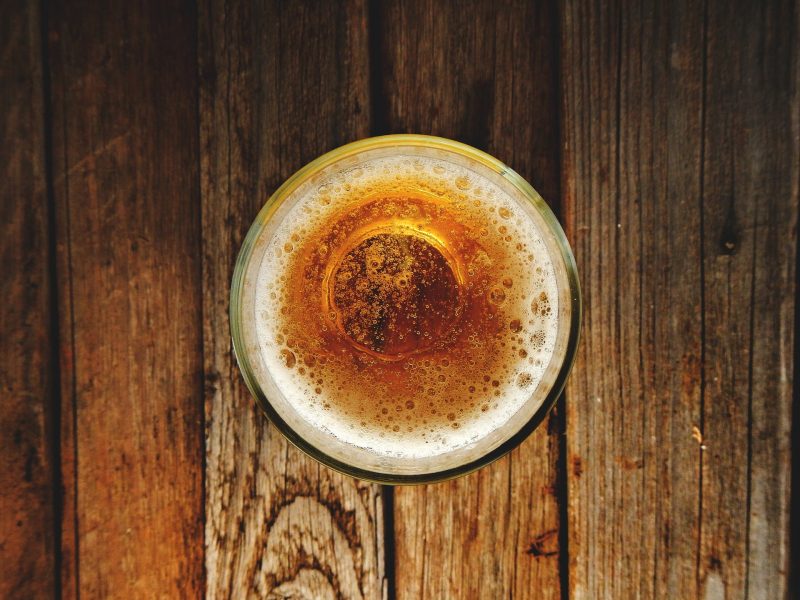 Hoppy beer is all the rage among craft brewers and beer lovers, and now UC Berkeley biologists have come up with a way to create these unique flavors and aromas without using hops.

The researchers created strains of brewer’s yeast that not only ferment the beer but also provide two of the prominent flavor notes provided by hops. In double-blind taste tests, employees of Lagunitas Brewing Company in Petaluma, California, characterized beer made from the engineered strains as more hoppy than a control beer made with regular yeast and Cascade hops.

Bryan Donaldson, innovations manager at Lagunitas, detected notes of “fruit-loops” and “orange blossom” with no off flavors.

Why would brewers want to use yeast instead of hops to impart flavor and aroma? According to Charles Denby, one of two first authors of a paper appearing this week in the journal Nature Communications, growing hops uses lots of water, not to mention fertilizer and energy to transport the crop, all of which could be avoided by using yeast to make a hop-forward brew. A pint of craft beer can require 50 pints of water merely to grow the hops, which are the dried flowers of a climbing plant.

“My hope is that if we can use the technology to make great beer that is produced with a more sustainable process, people will embrace that,” Denby said.

Hops’ flavorful components, or essential oils, are also highly variable from year to year and plot to plot, so using a standardized yeast would allow uniformity of flavor. And hops are expensive.

A former UC Berkeley postdoctoral fellow, Denby has launched a startup called Berkeley Brewing Science with Rachel Li, the second first author and a UC Berkeley doctoral candidate. They hope to market hoppy yeasts to brewers, including strains that contain more of the natural hop flavor components, and create other strains that incorporate novel plant flavors not typical of beer brewed from the canonical ingredients: water, barley, hops and yeast.

The engineered yeast strains were altered using CRISPR-Cas9, a simple and inexpensive gene-editing tool invented at UC Berkeley. Denby and Li inserted four new genes plus the promoters that regulate the genes into industrial brewer’s yeast. Two of the genes – linalool synthase and geraniol synthase – code for enzymes that produce flavor components common to many plants. In this instance, the genes came from mint and basil, respectively. Genes from other plants that were reported to have linalool synthase activity, such as olive and strawberry, were not as easy to work with.

The two other genes were from yeast and boosted the production of precursor molecules needed to make linalool and geraniol, the hoppy flavor components. All of the genetic components – the Cas9 gene, four yeast, mint and basil genes and promoters – were inserted into yeast on a tiny circular DNA plasmid. The yeast cells then translated the Cas9 gene into the Cas9 proteins, which cut the yeast DNA at specific points. Yeast repair enzymes then spliced in the four genes plus promoters.

The researchers used a specially designed software program to get just the right mix of promoters to produce linalool and geraniol in proportions similar to the proportions in commercial beers produced by Sierra Nevada Brewing Company, which operates a tap room not far from the startup.

They then asked Charles Bamforth, a malting and brewing authority at UC Davis, to brew a beer from three of the most promising strains, using hops only in the initial stage of brewing – the wort – to get the bitterness without the hoppy flavor. Hop flavor was supplied only by the new yeast strains. Bamforth also brewed a beer with standard yeast and hops, and asked a former student, Lagunitas’s Donaldson, to conduct a blind comparison taste test with 27 brewery employees.

“This was one of our very first sensory tests, so being rated as hoppier than the two beers that were actually dry-hopped at conventional hopping rates was very encouraging,” Li said.

Denby came to UC Berkeley to work on sustainable transportation fuels with Jay Keasling, a pioneer in the field of synthetic biology and a professor of chemical and biomolecular engineering. The strategy developed by Keasling is to make microbes, primarily bacteria and yeast, ramp up their production of complex molecules called terpenes, and then insert genes that turn these terpenes into commercial products. These microbes can make such chemicals as the antimalarial drug, artemisinin, fuels such as butanol, and aromas and flavors used in the cosmetic industry.

But the brewing project “found me,” Denby said

“I started home brewing out of curiosity with a group of friends while I was starting out in Jay’s lab, in part because I enjoy beer and in part because I was interested in fermentation processes,” he said. “I found out that the molecules that give hops their hoppy flavor are terpene molecules, and it wouldn’t be too big of a stretch to think we could develop strains that make terpenes at the same concentrations that you get when you make beer and add hops to them.”

The final hook was that a hoppy strain of yeast would make the brewing process more sustainable than using agriculturally produced hops, which is a very natural resource-intensive product, he said.

“We started our work on engineering microbes to produce isoprenoids – like flavors, fragrances and artemisinin – about 20 years ago,” said Keasling. “At the same time, we were building tools to accurately control metabolism. With this project, we are able to use some of the tools others and we developed to accurately control metabolism to produce just the right amount of hops flavors for beer.”

Denby and Li first had to overcome some hurdles, such as learning how to genetically engineer commercial brewer’s yeast. Unlike the yeast used in research labs, which have one set of chromosomes, brewer’s yeast has four sets of chromosomes. They found out that they needed to add the same four genes plus promoters to each set of chromosomes to obtain a stable strain of yeast; if not, as the yeast propagated they lost the added genes.

They also had to find out, through computational analytics performed by Zak Costello, which promoters would produce the amounts of linalool and geraniol at the right times to approximate the concentrations in a hoppy beer, and then scale up fermentation by a factor of about 100 from test tube quantities to 40-liter kettles.

In the end, they were able to drink their research project, and continue to do so at their startup as they ferment batches of beer to test new strains of yeast.

“Charles and Rachel have shown that using the appropriate tools to control production of these flavors can result in a beer with a more consistent hoppy flavor, even better than what nature can do itself,” Keasling said.