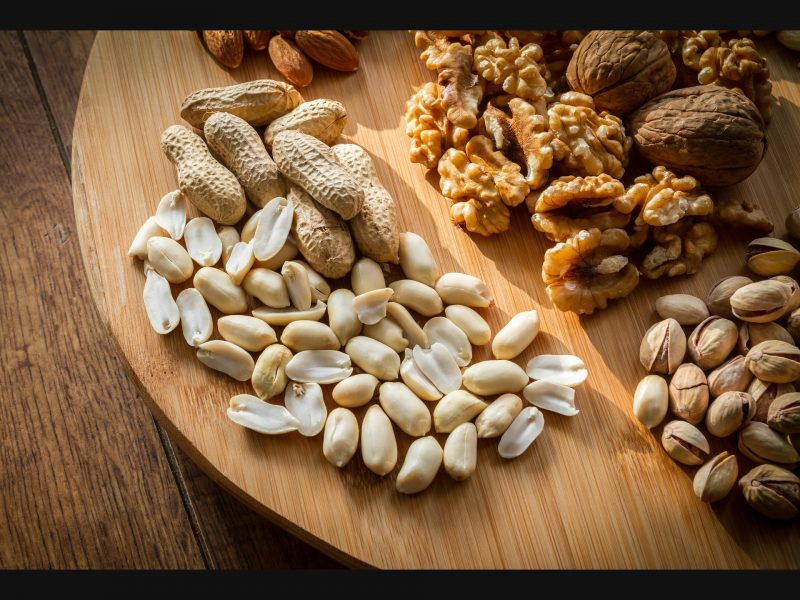 People who regularly eat nuts, including peanuts, walnuts and tree nuts, have a lower risk of developing cardiovascular disease or coronary heart disease compared to people who never or almost never eat nuts, according to a study published in the Journal of the American College of Cardiology. The study is the largest to date looking at frequency of nut consumption in relation to incident cardiovascular disease.

Recently, dietary recommendations have shifted toward diets including higher quantities of plant-based foods over animal-based foods, with most dietary patterns including nuts because of their association with reduced cardiovascular risk factors and unique nutritional composition.

While many past studies focused on nut consumption as a whole, researchers in this study also looked at the association between specific types of nuts–peanut butter, peanuts, walnuts and tree nuts–with major cardiovascular events. Peanuts were included even though they are actually a legume because they have a similar fatty acid and nutrient profile as other nuts.

The study looked at over 210,000 people, including women from the Nurses’ Health Study and Nurses’ Health Study II and men from the Health Professionals Follow-up Study, with up to 32 years of follow up. In all three groups, information about medical history, lifestyle and health conditions were collected via self-administered questionnaires every two years.

Participants who consumed five or more servings of nuts a week had a 14 percent lower risk of cardiovascular disease and a 20 percent lower risk of coronary heart disease than participants who never or almost never consumed nuts. The results were similar when accounting for consumption of tree nuts, peanuts and walnuts individually. Researchers found no evidence of an association between total nut consumption and risk of stroke, but eating peanuts and walnuts was inversely associated with the risk of stroke. Peanut butter and tree nuts were not associated with stroke risk.

“Our findings support recommendations of increasing the intake of a variety of nuts, as part of healthy dietary patterns, to reduce the risk of chronic disease in the general populations,” said Marta Guasch-Ferre, PhD, lead author of the study and research fellow at the department of nutrition at Harvard T.H. Chan School of Public Health.

Several limitations were noted in the study, including that the sample size was limited to white health professionals. However, the researchers note that the results can be generalized to men and women of different ethnicities because there is no reason to expect the underlying mechanisms to be different. Also, because the nut intake was self-reported, errors are inevitable, and there was not data on how the nuts were prepared, so the influence of preparation methods was not able to be tested.

In an accompanying editorial comment, Emilio Ros, MD, PHD, of the Endocrinology and Nutrition service at the Hospital Clínic in Barcelona and investigator of CIBEROBN, a research network of Instituto de Salud Carlos III, Spain, confirmed that the consistency of the findings strongly suggests an association between nut consumption and heart disease protection, but there is more to research.

“Ideally, further investigations should test the effects of long-term consumption of nuts supplemented into the usual diet on hard cardiometabolic events,” Ros said. “In the meantime, raw nuts, if possible unpeeled and otherwise unprocessed, may be considered as natural health capsules that can be easily incorporated into any heart-protective diet to further cardiovascular well-being and promote healthy aging.”