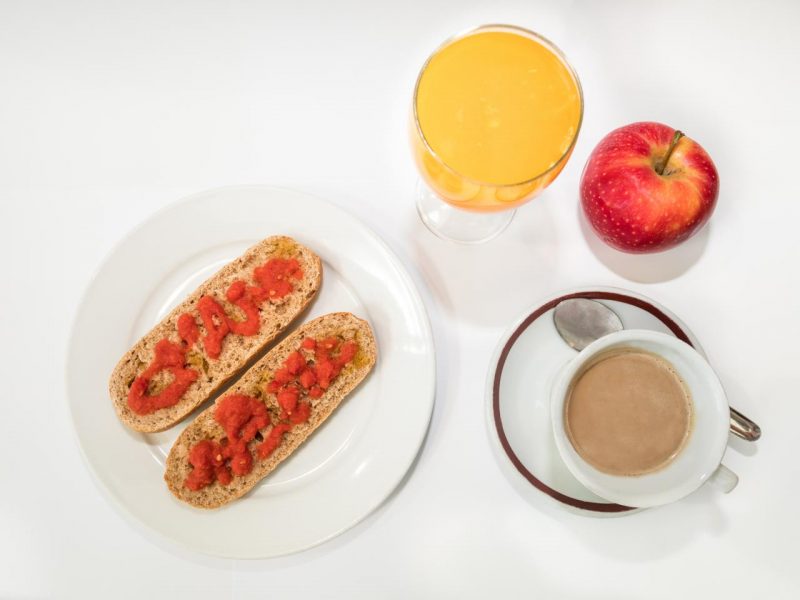 Skipping breakfast or eating very little at the start of the day doubles the risk of atherosclerosis. This is the latest finding from the Progression and Early Detection of Atherosclerosis study (PESA), led by the Centro Nacional de Investigaciones Cardiovasculares Carlos III (CNIC) in partnership with Banco Santander, and is published today in the Journal of American College of Cardiology (JACC). The report shows that people whose breakfast contains less than 5% of the recommended daily calorie intake (100 calories for a daily intake of 2000) have on average twice the number of atherosclerotic lesions as those who eat a high-energy breakfast. This increased risk, moreover, is independent of classical risk factors such as smoking, high cholesterol, and physical inactivity. The report not only confirms the importance of eating breakfast for cardiovascular health, but also suggests that skipping breakfast could indicate more generally unhealthy eating and lifestyle habits.

The PESA-CNIC-Santander study is a prospective cohort study of more than 4000 middle-aged office workers and is led by CNIC General Director Dr. Valentín Fuster. Study participants are monitored with the latest imaging technologies over a 6-year period with the aim of characterizing the prevalence and progression of latent, ‘subclinical’ atherosclerotic lesions. These imaging findings are scrutinized for associations with molecular markers and environmental factors, including dietary habits, physical activity, biorhythms, psychosocial characteristics, and exposure to environmental pollutants. Atherosclerotic plaques are fatty deposits in the walls of arteries that first appear at a young age, but in these early phases they produce no symptoms, thus giving rise to the term subclinical atherosclerosis.

The significant impact of breakfast on cardiovascular health is well known. What the latest PESA project has done is to evaluate the relationship between 3 distinct breakfast patterns and the presence of atherosclerotic plaques in asymptomatic individuals. The results suggest that skipping breakfast is an indicator of more generally unhealthy lifestyle habits, associated with a higher prevalence of generalized atherosclerosis.

The new study set out to characterize the association between different breakfast patterns and cardiovascular risk factors, and specifically to determine if skipping breakfast was linked to the presence of subclinical atherosclerosis in a population with no history of cardiovascular disease. The imaging analysis determined the presence of plaques in distinct vascular territories: the carotid and femoral arteries, the aorta, and the coronary arteries.

In the study population, 20% of participants regularly ate a high-energy breakfast, providing >20% of the recommended calorie intake. The largest proportion, 70%, ate a low-energy breakfast (between 5% and 20% of daily calorie intake), and 3% either skipped breakfast or ate very little (<5% of daily calorie intake). Individuals in this last category spent less than 5 minutes on breakfast, consuming only coffee or fruit juice, or skipped breakfast entirely. The CNIC research team also found that this group tended to have more generally unhealthy eating habits and a higher prevalence of cardiovascular risk factors.

Using ultrasound technology, the research team observed 1.5 times more atherosclerotic plaques in the arteries of breakfast skippers than in the vessels of study participants eating an energy-rich breakfast. Moreover, for some vascular regions the number of plaques was as much as 2.5 times higher in participants who skipped breakfast or ate very little. Study first author and CNIC researcher Irina Uzhova explained that these differences are independent of the presence of cardiovascular risk factors and unhealthy lifestyle habits.

Some earlier population studies showed that a good breakfast is related to lower body weight, a generally more healthy diet, and a lower chance of increasing cardiovascular risk through high blood cholesterol, high blood pressure, and diabetes. It is also well known that lifestyle changes can modulate factors linked to cardiovascular risk, including diabetes, obesity, high blood pressure, and dyslipidemia. Diet, in terms both of nutritional quality and acquired eating patterns, is therefore a major target in strategies to prevent cardiovascular disease.

Study author Dr. José Luis Peñalvo explained that this is the first study to provide direct evidence for an association between different breakfast patterns and the presence of atherosclerotic lesions detected by noninvasive vascular ultrasound imaging. Dr. José María Ordovás, also a study author and an expert in nutrigenomics, added that the analysis suggests that skipping breakfast could be a genuine risk marker in the initial stages of atherosclerotic disease, requiring further research into the underlying mechanism of action. This point was underlined by PESA scientific coordinator Dr. Antonio Fernández-Ortiz: “We need earlier and more precise risk markers for the early phases of atherosclerosis that will allow us to improve strategies to prevent myocardial infarction, stroke, and sudden death. These latest results make a definite contribution to achieving this goal.”

Dr. Fuster, the principal investigator on the PESA study, considers that the support for PESA from the Santander group and the CNIC provides a model for other research and business organizations to follow, emphasizing that “the PESA study makes an incalculable contribution to scientific knowledge and public health.”

Banco Santander Medical Services Director Dr. José María Mendiguren, also an author on the study, added that that the PESA definitively positions Grupo Santander at the forefront of corporate social responsibility due to its contribution to knowledge generation in the important field of cardiovascular health.